Those of us who missed our chance to attend Space Camp and possibly take an accidental trip to space (YouTube link) still have the opportunity to discover new worlds. Just this year, two exoplanets a whopping 352 lightyears away were discovered – not by astronomers manning a large-scale telescope, but by citizen scientists participating from their homes. What cold be better than participating in extraterrestrial discovery without ever having to ride in a human centrifuge?

Many of us have more powerful computers in our pockets than those which sent spacecraft to the moon. Not only that – these devices have better cameras capable of better resolution than even those used in Hollywood productions not so long ago. At the same time, there is nothing new about the concept of citizen science itself – it’s been hopping in the world of cicada research since at least 1840. 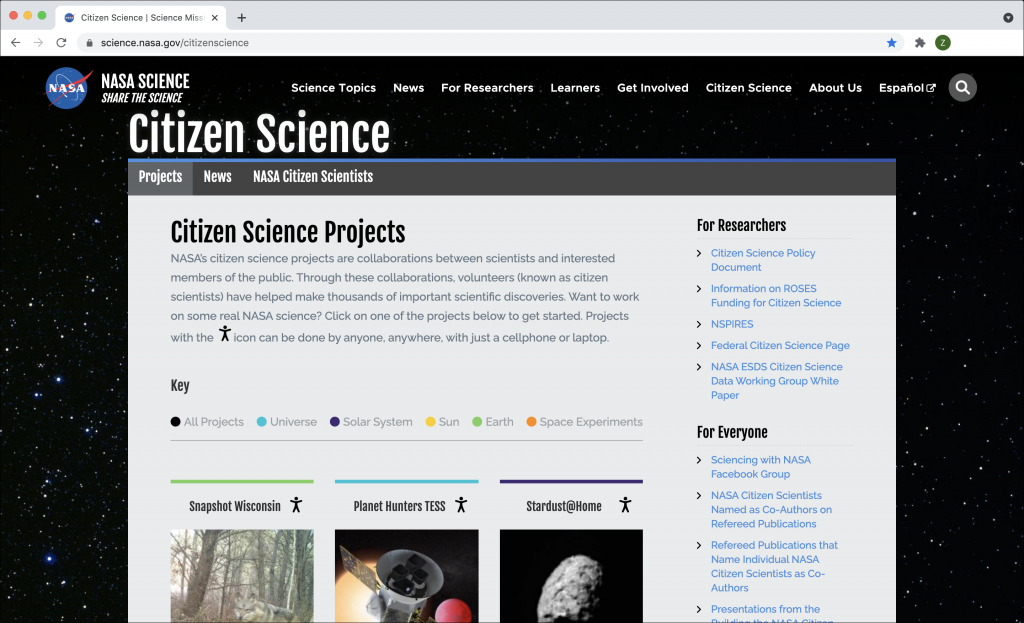 NASA’s citizen science projects are collaborations between scientists and interested members of the public.

What is new: the massive amounts of data that can now be collected within ever shorter periods of time. That also translates into massive amounts of data that must be sifted through in order to find the meaning within it. While projects which include millions of lines of code or complex modeling rely on computing devices, the human component of research and analysis remains vital. In these cases, it makes sense for scientists – often feeling a budget crunch – to utilize the skills of people eager to help.

When done well, citizen science is a win-win for everyone involved.

When SETI@home launched in 1999, the creators expected maybe 1,000 people to sign up. Their single desktop machine and server quickly crashed when one million people attempted to sign up. The desire and willingness is there and, when done well, citizen science is a win-win for everyone involved – from laypeople to researchers to funding organizations.

But, as always, the key is doing it well. Even the best intentions can’t keep things on track without a solid plan. If your project is suffering from low participation or high drop-offs in engagement – but you lack the budget or resources to start over – walking a mile in your user’s shoes can reveal which steps are missing and how you can mitigate them.

What your citizen scientists need to know

If you are interested in exploring the world of citizen science yourself, here are a few links to get you started: