Does the truth matter?

What if you told the truth, a truth that affected every human life on earth, and nobody cared? 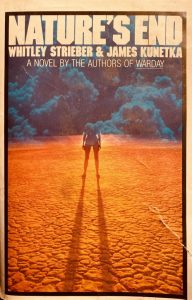 Not so long ago, many of us believed that improved access to credible, well-sourced information held the key to informing human decisions at all levels. In the early days of the web, an undercurrent of social justice spoke to the idea of the Internet as the great equalizer, as a window into what was originally meant to be real transparency.

If only we knew more about the world that we live in. If only we understood that all things are interconnected. If only we could learn to value ethics above rank profiteering. We would make better decisions for ourselves and for our society. We would make good moral decisions.

We now know that access to factual knowledge does not necessarily improve the world. We are living that reality today.

Long before online character assassination and intimidation became a daily activity, predictive fiction posited a different use of these technologies, and a different outcome.

In 1986, Whitley Strieber and James Kunetka co-wrote the forgotten dystopian classic Nature’s End. The novel, set in 2025 amidst the global collapse of the environment, and the resulting political melée, combines then-current eco-journalism with predictive fiction to extrapolate a world that is recognizable in 2020.

The situation is so dire that a new international political party emerges: the Depopulation.

Nature’s End takes place in an America beset by natural catastrophes accelerated by climate change. Leaders have ignored all warnings from the scientific community, or failed to act in time. Class distinctions etch severe and uncrossable lines between the affluent and the destitute. The situation is so dire that a new international political party emerges: the Depopulation. Lead by a beatific Indian politician named Gupta Singh, the Depopulation proposes a voluntary reduction of global population by one third using a lottery system. A kinder, gentler mass suicide. And his party is gaining in Congress.

In the world of Nature’s End, deceptive technologies akin to deep-fakes can’t be used by just anyone – they are used only by “convictors,” specialists who create artificial constructs of politicians running for office – “convictions” – which can be accessed and interviewed by any citizen. The citizen then decides whether to support the candidate, and our hero, convictor John Sinclair, has a track record of exposing the repulsive psychological secrets of political strongmen to a populace that then rejects them. Sinclair is determined to create a conviction of Gupta Singh – a man who is not at all what he seems to be.

The novel hits close to our current realities, making us witness to the uncontrolled burning of the Amazon, the air emergencies in Denver and Mexico City, the unexpected firestorm that destroys perilously built homes above Los Angeles, the new and terrifying dust bowl that is middle America, the biologically twisted fate of the dispossessed. Yet the novel’s intrigue lies in the questions it posed in 1986 – questions we have yet to answer about our society and our planet.

The greatest question is the one we are answering in real time: does the truth matter?

In the novel, Gupta Singh is finally revealed to be an impostor with severe psychiatric problems, and the world turns away from Depopulationism. Strieber and Kunetka base this outcome on an almost quaint concept: the public will not support a bad person, or a bad idea, or a bad policy once they have tangible evidence.

Despite the undeniably painful social and ecological losses depicted in Nature’s End, its greatest tragedy, seen in hindsight, is the authors’ belief that people care about the truth. That they will do the right thing once they know better.

Kunetka and Strieber were meticulous in researching the climatic and policy events from which they extrapolated this moving novel. But the blind spot appears in the assumption that people will turn away from hatred, misanthropy, cruelty. In our 2020 world of instant communication, we can see all of these things every single day. Yet it seems some of us cannot turn away from them; indeed, some are drawn to the darkness that matches their own.

It is too late, in our 2020, to control the malevolent dissemination of misinformation. Our greater problem is this: unlike the America of Nature’s End, our America is not turning away from hatred, misanthropy, cruelty, racism, misogyny, destructive greed. Even when they are exposed by the blazing light of undeniable truth.

That is the tragedy of Nature’s End, of educators and communicators, of all who fought to make information widely accessible worldwide. There is no technology that will change that.

Originally published in FutureProof, a blog of the IEEE Society on Social Implications of Technology, May 27th, 2020.