Living downstream of the misinformation dam-break

From the Johnstown Flood to the flood of toxic social media

While some dismissed recent Congressional hearings on social media misinformation as “deja vu all over again,” there are signs of cracks in the digital equivalent of the South Fork Dam – the earthen structure that protected a private club’s fishing lake in the 1880s and would doom the people of Johnstown, Pennsylvania in 1889. 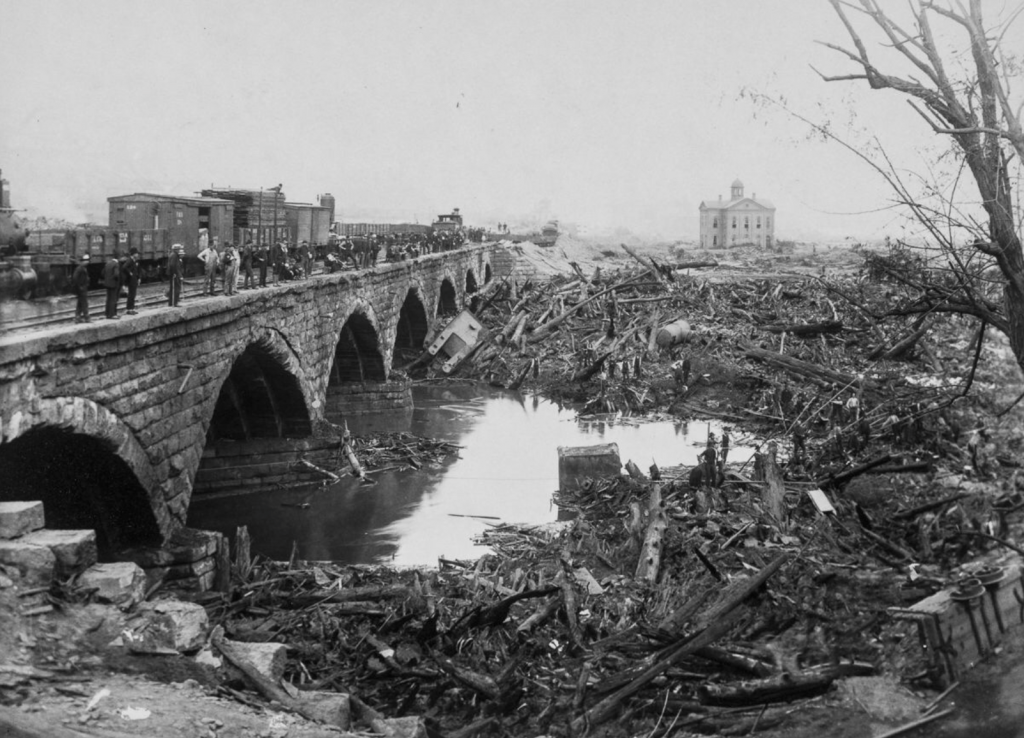 After the failure of the South Fork Dam, June 1889, Johnstown, Pennsylvania US. No one was held responsible for the South Fork Club’s neglect of the dam. Image from Library of Congress.

The rich-vs.-poor disconnect, then and now

The dam created a resort situated well above the town. The wealthy principals of the South Fork Fishing and Hunting Club – including names like Frick, Mellon, and Carnegie – focused on land speculation. They removed relief valves and lowered the dam, then welcomed scores of the rich to enjoy their bucolic escape from the gritty places that fueled their fortunes. The guests never thought about the risk they created for the working people downstream — until the dam failed in 1889 and drowned Johnstown under 20 million tons of water. More than 200 people were killed in a hellscape of water, fire, train cars, debris, and rolls of barbed wire from a local factory. The town was completely destroyed.

The culprits walked away, as planned

And when it was all over – after this preventable suffering was unleashed upon the working people of Johnstown – not a single member of the South Fork Fishing and Hunting Club was found liable. They were defended by attorneys who also were members of the South Fork Club. The people of Johnstown were left to find and bury their dead, to rebuild their town with the support of the nascent Red Cross and other volunteers. The recent find of carefully hidden Club documents reveals the members, all sophisticated businessmen, had “meticulously” lawyered their legal documents to ensure they would not be held to account.

The toxic social media flood of the 21st century

The people of Johnstown could not prevent the egregious construction of a club they could not join. They did not have the wealth and privilege of the robber barons. And today we find ourselves downstream of a different kind of digital flood. Just as the South Fork Club dangerously lowered the height of a dam, the social media giants repeatedly fail to protect users from misinformation and online abuse.

The ease of using social media, combined with the amorality of its owners, removes any barrier to entry. The result: The loss of any buffer against malignant social media users who threaten ethnic groups, women, LGBTQ youth, journalists, scientists, Asians, Mexicans, any marginalized group of people targeted by the 21st-century version of a rabid mob.

News reports in March of 2021 indicate the violent Oathkeepers coordinated the January 6 assault on the Capitol using Facebook. Why were they even allowed on the platform? Unless we create real boundaries, enforced by legislation, the social media giants will also walk away from the chaos they have enabled.

The ease of using social media combined with the amorality of its owners removes any barrier to entry. The result: The loss of any buffer against malignant social media users who threaten ethnic groups, women, LGBTQ youth, journalists, scientists, Asians, Mexicans, any marginalized group of people targeted by the 21st-century version of a rabid mob.

In the history of American business, and global business for that matter, we know that fortunes are made on the backs of unwilling participants. Few fortunes are free of misdeeds.

In the history of American business, and global business for that matter, we know that fortunes are made on the backs of unwilling participants. Few fortunes are free of misdeeds. The meat packers of Chicago gained immense wealth through the well-documented, ugly abuse of their workers and their animals. The social media titans are getting rich while creating chaos even in the lives of people who stay away from their platforms.

Is Congress finding its collective backbone on social media misinformation?

The most recent Congressional hearings lead us to two conclusions: The social media CEOs will continue business as usual until we stop them; and maybe Congress is starting to pay attention.

As Business Insider reports, Rep. Mike Doyle (Pa.) confronted Facebook’s Zuckerberg on a group called “Stop the Steal,” which attracted 365,000 members in less than two days before Facebook removed it because some members were making “worrying calls for violence.” Facebook waited for days after the insurrection to take definitive action on “Stop the Steal” content, presumably to extract the full financial value from allowing the group in the first place.

When Rep. Doyle asked the CEOS of Google, Facebook, and Twitter whether their companies were partly responsible for the January 6 attack on the Capitol, Twitter’s Jack Dorsey was the only one to acknowledge his company’s responsibility. Google’s Sundar Pichai reiterated his typical C-suite nerd responses. Facebook’s Mark Zuckergberg brought his now-standard performance: Sputttering with indignation, and studiously avoiding any direct answers. All while his company develops social media for kids.

Zuckerberg and misinformation: blood from a stone

The biggest waste of time and money for all of us is continuing to treat Mark Zuckerberg of Facebook as if he were an honest broker. His entire career, since college, has shown him to be an amoral liar. He cannot be the smartest guy in the room *and* feign ignorance of the social and political chaos taking place via misinformation on his platform. Here in the US, we suffered the January 6 insurrection. In other countries, people have died over politics. (Actually, Facebook’s tolerance of anti-vaxxers will lead to more deaths here, too.)

Facebook’s “friend” metaphor no longer camouflages its misdeeds, just as a scoundrel is a scoundrel even when wrapped in a patriotic flag.

A bad actor is a bad actor. Either Mark Zuckerberg truly does not understand the impact of his creation and its policies, or he is an upscale sociopath in a hoodie (or suit) who will continue to deliberately profit from chaos until he is stopped. Facebook’s “friend” metaphor no longer camouflages its misdeeds, just as a scoundrel is a scoundrel even when wrapped in a patriotic flag.

The only solution to bring the Big Three – especially Facebook – to heel: Anti-trust legislation. Fines. Regulation. Enforcement. The same tools that were brought to bear on other industries whose actions may harm others, such as the aforementioned meatpacking business, mining, sweatshops, manufacturing, construction, chemical plants, nuclear plants. In most cases we recognized the dangers after the damage was done.

Despite Google’s evisceration of its original “don’t be evil” ethos, it is still worth talking to Sundar Pichai. Despite Jack Dorsey’s tortured musings on what to do with the power of Twitter, he too can be engaged. Future hearings with these two leaders are worth having. Having Zuckerberg show up at a hearing just to hear the same insincere, infuriating excuses as he plays his game of dodgeball with inquisitors is pointless.

We as a society should not dismiss the tentacles of social media just because we see a lot of cute cat gifs. If you are still wondering how much of a difference a social media platform really can make, witness the banning of a former president from Twitter, and the subsequent subsidence of messaging from that source. Was that a violation of free speech, or the reining-in of a malign political force?

The Internet and its technologies are and will continue to be an integral force affecting the well-being of literally billions of people. How many have already suffered everything ranging from harassment to political persecution because of toxic social media? It is too late to plead ignorance about the impact of Google, Twitter, and Facebook. The power of the Big Three may not look like the power we regulated inside power plants, but its effects can be just as deadly if no one is ensuring that there is safety for all.

Perhaps the saddest part of the Johnstown story: eyewitnesses at the base of the dam saw it breach, instantly recognizing the danger. Despite superhuman efforts to relay the news downstream, the alarm never reached enough people until their fate was sealed.

We could build a stronger digital foundation that leads with the well-being of users. We could create regulations to protect the marginalized and the innocent. We could make the powerful, accountable.

In 2021, we cannot say that we do not know what abuse of social media can bring forth. We know all too well. Perhaps as the United States works on rebuilding its post(?)-COVID economy and its battered society, we can also bring a reckoning to the Big Three that could not exist without us. We could build a stronger digital foundation that leads with the well-being of users. We could create regulations to protect the marginalized and the innocent. We could make the powerful, accountable.

Remember, we are the “social” in social media. We can choose not to participate, and we can choose to protect those who do.

Originally published in Future Proof, a blog of the IEEE Society on Social Implications of Technology, April 20th, 2021.