Thus we should question the conclusion of a recent (March 9 and 10) The Hill/HarrisX poll: “Tightening regulations on Google, Facebook and Amazon,” which have increasingly become the rhetorical targets of President Trump and some of the Democrats who want to replace him, does not appear to be something that most Americans are interested in. What, precisely, does “tightening regulations” mean? 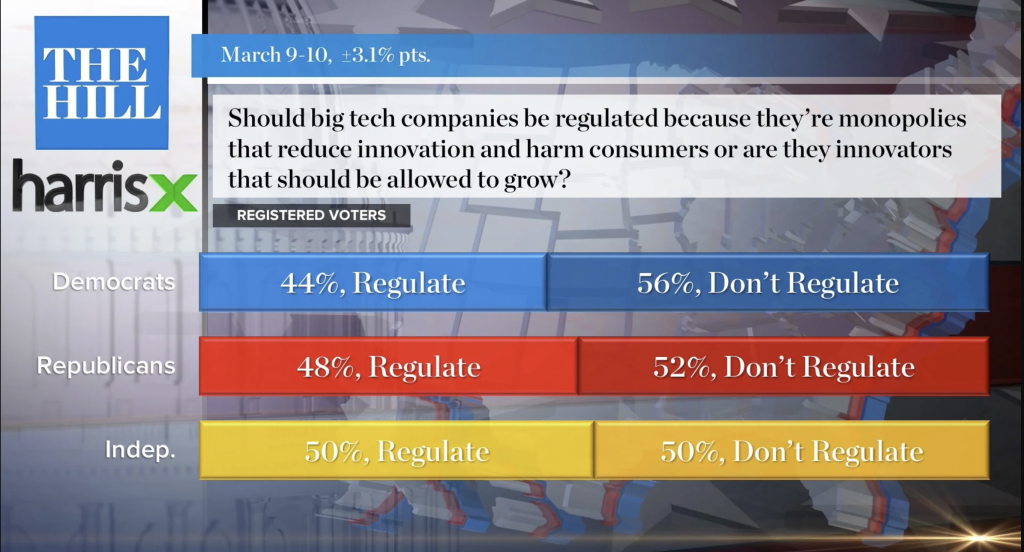 Screen capture of poll results from The Hill-Harris X March 2021. (Side note: image breaks most rules for usability.)

The word “regulation” has been demonized by those who back an unfettered world of sink-or-swim markets. Yet the need for order – not to mention the defense of the defenseless – is essential to a free and functioning society.

The phrase “tightening regulations” is arguably in the eye of the beholder. To politicians and policymakers, the term “regulation” is less inside-baseball than simply a bit of shorthand. For a controversial American President,”regulation” means fighting perceived liberal bias of social media, a weapon in his highly politicized vendetta with Amazon’s Jeff Bezos. For progressive leaders, “regulation” is intended to moderate the de-facto monopoly of the tech giants.

For privacy advocates, “regulation” means greater oversight of how personal data is acquired, packaged and sold.

The word “regulation” has been demonized by those who back an unfettered world of sink-or-swim markets. Yet the need for order – not to mention the defense of the defenseless – is essential to a free and functioning society. The verb “to regulate” means:

The wild-West ethos of American popular culture often poses a rebellious response to anything that might fetter personal freedom. And yet those same “rebels” expect a functioning interstate highway system with signage, reasonable speed limits, manageable exits (and rest stops!) available 365 days a year. That highway system was the result of the Federal Highway Act of 1956, with 90% of the proposed expenditure funded by the Federal government.

What was it like to drive across North America before interstate highways? What were those 41,000 miles like before political leadership intervened? And, with the specter of nuclear arms hovering over daily life, how could the country’s burgeoning population be evacuated if the need arose?